Hopefully, considering that everything runs well, the wheat crop sowed during the recent months in Brazil is expected to reach 7 million ton. The total annual Brazilian consumption is about 12 million ton.  The two Brazilian states that lead the wheat crops are Rio Grande do Sul and Parana, both states are in the region called “South region” in Brazil. (see map). 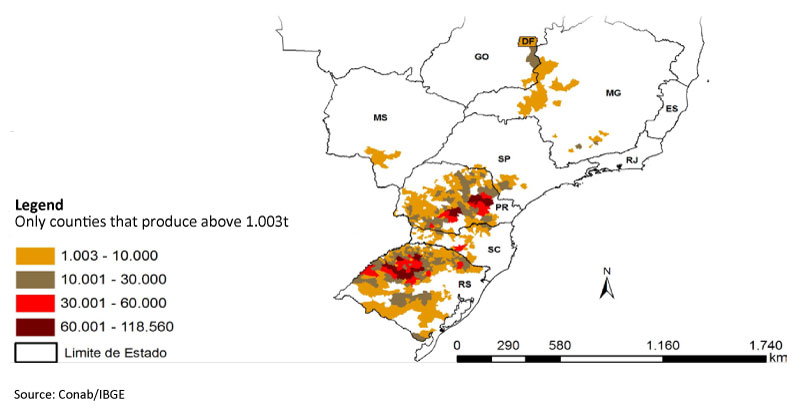 The total area is lower than last year, about 5.3% (2.6 million hectares) but even though the forecast is that the production could increase by 18% in Rio Grande do Sul compared to last year.  In Parana State, the total production should increase by 4%.

The estimated yield in Rio Grande do Sul is 2.4 ton. per hectare while in Parana they consider 3,0 ton. per hectare. The production cost is expected to grow 20 to 30%, but the price increase for the cereal should compensate it. Cost per hectare is estimated around USD500 to 600.

Considering the same planted area, some growers indicate that by growing wheat in the Winter they get 7 to 8% more yield on their soybean summer crop.

The majority of the wheat cultivars used in Brazil is locally developed by private seed companies and/or public institutes. Although the key concentration is in the South of Brazil, they recently developed some varieties for the “cerrado” (savanna) areas.

Multinational companies had started to invest more recently on this crop in Brazil. Among them, we can mention Dow and Limagrain.