A recent information released by EMBRAPA indicates that the Brazilian corn seed companies offered 478 hybrids to the market for the 2014/15 crop. Conventional hybrids represent 39% of the total, while GMO represents 61%. It is interesting to see how dynamic this market is since 97 new hybrids were introduced into the market while 86 were dropped. From the 97 new hybrids introduced into the market, 37 are really “new genetics types”, and 25 of them are Single Cross.

The same hybrids could be offered to the market on non-GMO version, and on several GMO versions. Based on this, from the total of 478 cultivars, 320 are really hybrids with different genetics while 158 are variations of the same hybrids. From the 320 different hybrids, 186 are commercialized on their conventional version but they can also be offered in some GMO version. The other 134 versions are being offered only in GMO version.

An early maturity hybrid group represents 66.25% of hybrids while hyper early and super early represents another 24.37% of the hybrids.

Among the GMO hybrids, 82.87% are Single Cross. From the total of the GMO hybrids 292 are offered with insect (Lepidoptera) and herbicide resistance.

There are in the market two traits with herbicide resistance, which are: NK603 and GA21- TG. Besides it there are the Liberty Link trait hybrids offered with HERCULEX. The trait GA 21 –TG is only offered staked with other trait.

The most important offered options are below:

58 hybrids with HERCULEX (indicated by H, HX or Hx)

20 hybrids with YIELDGARD (indicate by (Y, YG, TP and Bt)

7 hybrids with AGRISURE (indicated by TL)

33 cultivars with POWERCORE (indicated by PROX or PW)

38 hybrids with VT PRO and R.Ready (indicated by PRO2)

13 hybrids with HERCULEX plus R. Ready (indicated by YH).

Balance of hybrids with other combinations.

See below the most important GMO types available for the 2014-15 crop. 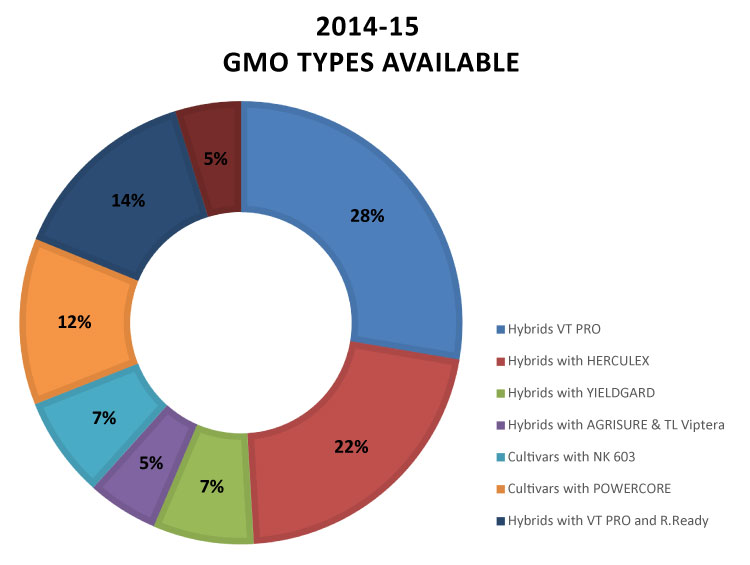