Sorghum is considered a small crop in Brazil when compared with large areas of soybean, corn, sugar cane, etc.

At same time sorghum is a good option for Brazialian farmers since and especially the grain sorghum is sowed in period when rainfall is not so high and therefore does not allow farmers to grow other crops like corn,etc. Usually grain sorghum is planted in the Central area of Brazil after the farmers to harvest soybean summer crops.Forage or silage sorghum is growed in the summer and for sure used more frequently in milk cattle diet.

Below you can see a brief history about sorghum crop in Brasil, where blue line is total production, red is yield and green is acreage. 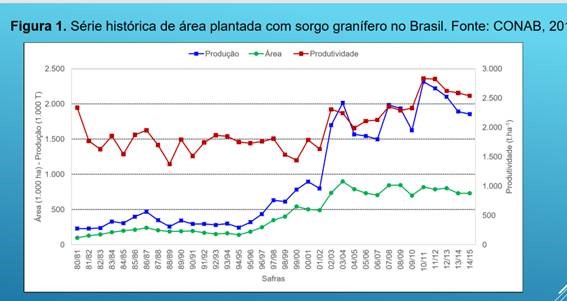 As we said above grian sorghum is planted in Central Region of Brazil as a second crop.

Map below gives a general view of how grain sroghum planted area get more concentrated on last years.

Combining grain and forage & silage sorghum we have this other map below: 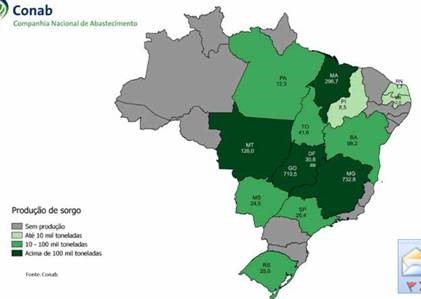 Considering sorghum crop has a smalls demand for water compared to cron when you go to a season that has less water sorghum could provide better profit than corn. The below grpahic shows such sitation. Blue line indicate corn gross profit by hectares whil the red line indicate same info for sorghum. Figures are in Brazilian local currency , but it clear sorghum profitability increase when you go to end of summer or less rain presence. 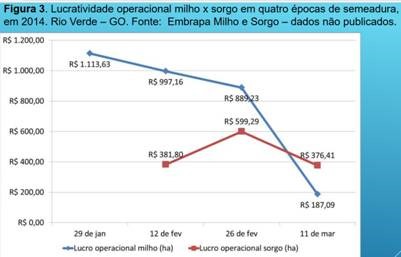 Grain sorghum utilization in Brazil is indicated on figure below, where large blue piece are poultry for meat, red are poultry for eggs, green are for porks, purple are catlle(feed lots) and light blue others. These are info from about 3 years ago. 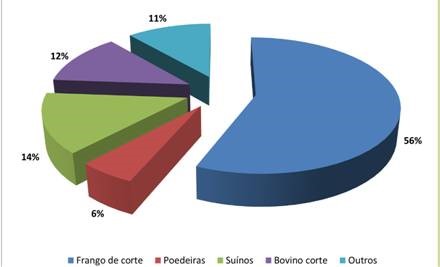 Although sorghum (grain) is cultivated not in summer season, but as a tropical country plant disease is one key factors.Antracnose is one of the most complicated disease to face in sroghum crop. Therefore hybrids with resistance or tolerance are welcome.

O JGMV is the second virus causing such problem. Before it only the Sugarcane mosaic virus (SCMV) was identified. So it was the first time they found JGMV virus infecting grain & forage sorghum in Brazil. 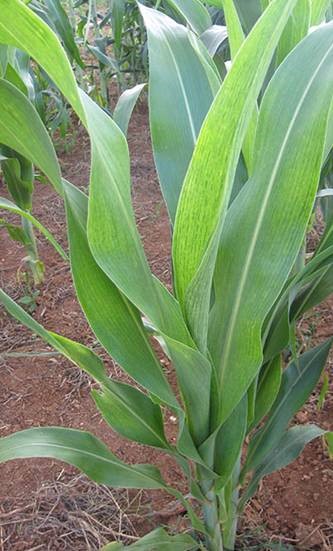 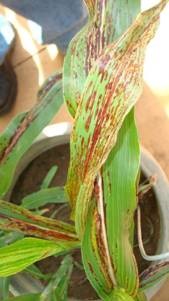 Seed market is supplied by large seeds companies, but we also have some domestic company who offer seeds for this crop. Generally seed quality and availabilty is good for the farmers requirements.