In the last three years, in Brazil, several seed companies have been involved in acquisitions or mergers, consolidating the market. The most recent examples were Agrosol, with Semences de France (In Vivo Group), and seeds Guerra with RAGT, both French; Dow AgroScience with Dupont/Pioneer; Morgan corn seeds from Dow AgroScience, acquired by the Chinese company Citic AgriFund, forming the LP Seeds; Monsanto, acquired by Bayer; the seed part of Bayer with BASL LibertyLink technology; the Monsanto sorghum seed sector with a strategic alliance with the American company Remington Seeds (in Brazil, Innovative Seed Solution); and the company Nidera, acquired by Syngenta, which in turn had already been acquired by the Chinese company Chemchina. 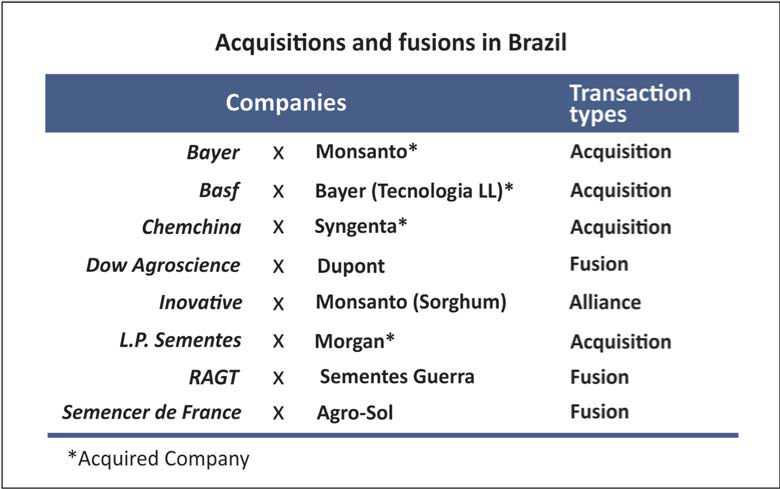 Some of these transactions were global strategies that reverberated in Brazil, such as Dow AgroScience merger with Dupont, Bayer purchase of Monsanto, Syngenta purchase of Chemchina, and Syngenta own Nidera.

The merger, purchase and sale of companies is part of the process of consolidating business on a capitalist environment in which governments have the tools to inhibit certain companies from having a monopoly on a particular activity. A good example was the recommendation that Dow AgroScience should sell the Morgan seeds after merging with Dupont and that Bayer should sell its share of the seeds with LibertyLink technology because it had bought the seed portion of Monsanto. Another consequence of the purchase of one company by another is the recent news that Dow AgroScience has changed the commercial name of its corn, soybean, sorghum and wheat seeds to Brevant, replacing the brands of Coodetec, BioGene and Dow Seeds. This change will give a new identity to the company seed business.

In Brazil, two large examples of seed purchase refer to Agroceres and FT seeds by Monsanto in the 1990s, which had a high market share in corn and soybeans, respectively. The purchase of FT seeds marked the beginning of the implementation of thelawofprotectionofcultivarsonthe country in 1997, because previously, the only protection that there was for Self pollination materials wasÂ only up to the basic seed, which, in practice, little protection was offered overall. The sale of the traditional Pioneer company to Dupont over the past decade has been historic, which has recently been merged with Dow AgroScience. The massive use of hybrid corn, with all its benefits, is due largely to Pioneer, which has been in existence for almost a century in the United States.

There are several goals that lead to investments in seed companies, such as access to germplasm, access to the farmer with a good business card (the seed), increase of the portfolio with products to be offered to the farmer, proper access to the farmer, and business opportunity. Until recently, investment meant only market concentration by a company that was already active in the same area. However, the market dynamics changed, and currently, new players are joining or making joint ventures to maximize potentialities.

The merger of the company AgroSol, of Mato Grosso, with the n Vivo group, is a good example of a merger or joint venture, in which AgroSol entered with the know- how of seed production and access to the farmer, and the In Vivo with the capital to expand the company. Undeniably, access to the farmer has an intangible value, especially when it is obtained professionally and with good technical assistance. 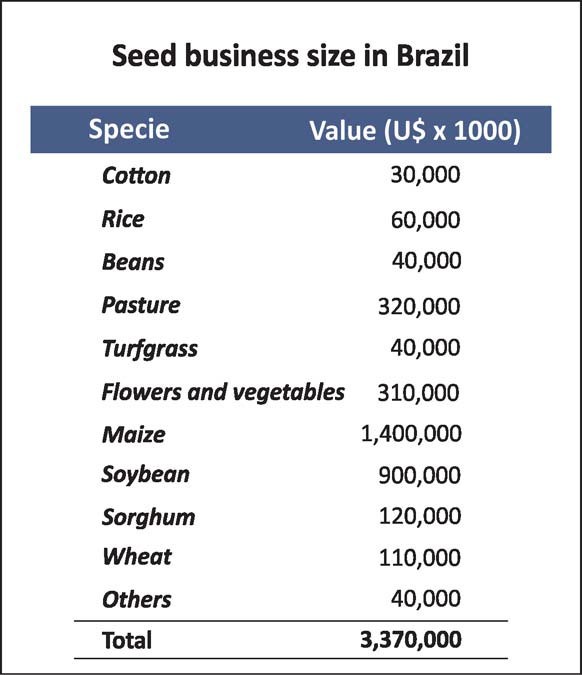 On the other hand, the purchase of Morgan corn seeds by the Chinese company Citic AgriFund means entering the corn seed market in Brazil, whose business size exceeds 1.3 billion dollars per year (see table in the text). This acquisition means the entry of a new player, with enough resources, in the market. On seeds, in general, the Basf company is practically making its debut after several attempts. Considering its greatness, it is expected that it will produce its own marketing rhythm with the farmer, since he will have in his portfolio, several products to meet the demands of the field.

In maize seeds, it can be considered that the number of players with their own germplasm increased with the acquisitions, being the commercialization practically all verticalized, which means that a company creates, develops and markets its own material.

It can be considered that in Brazil, six companies own more than 70% of the seed market, which until just a few years ago were only four companies, meaning that although the business is concentrated, itÂ already distributes the market slices among several companies. The seed business is high, however, it does not involve many players with investment capacity in research and development.

Corn seeds have a special featureintermsofbusinessprotection, that is, they can be marketed as a hybrid, possessing natural protection for those who create and develop the germplasm, because the result of their production, despite being high, is not recommendated for seed use, as it is a segregating material with marked decrease of productive potential. Thus, the farmer with high technology on his hands needs to buy seeds every year. This is one of the reasons for investments in corn companies.

On the other hand, in the case of soybeans, these are not hybrids, having its protection only through the Law of Protection of Cultivars, which, in Brazil, means that in order to commercialize the seeds, it is necessary to have the permission of the one who created the cultivar (normally 10% of the value of the seed). Thus, the soybean seed market is also attracting investors, whose business value exceeds 0.8 billion dollars per year.

Soybean seeds are commercialized mainly in the form of licensing, that is, the breeder creates and develops a cultivar, while the seed producer is in charge of production and commercialization, as eight breeders own more than 70% of the cultivars sown in the country, while more than 300 producers of soybeans are active in trade. The last investment was the purchase of the company Nidera, dedicated mainly to the creation and development of new cultivars of soybeans, and corn, to a lesser extent, by the company Syngenta (which already had a soy and maize breeding program). The Nidera company is one of the largest on the market share of soybean cultivars in the country, with more than 15% participation.

Examining the table in the text, where the magnitude of the seed business in the country was estimated, it is observed that more than 50% refer to corn and soybean seeds; however, other crops such as rice, wheat, cotton, sorghum, lawns, vegetables and fodder also have attractive annual trade values, as is the case of wheat, with more than 100 million dollars per year.

The search for consolidated seed companies with good access to the farmer will always exist and apparently will be a subject of much attention in the reality of agriculture as we move into the 21st century.

Investments in seed companies in Brazil have been carried out by companies from abroad, which visualize business opportunities in the country, requiring accurate information and mediation of professionals in the field. In this sense, SEEDnews interviewed Marcio Nascimento, renowned consultant of the MNagro company, who uses the ISF congresses to adjust or start a business relationship. In general, during the three-day event, heÂ participates in more than 20 business meetings, involving companies from around the world interested in the seed business in Brazil. At the moment, apparently the most interested are the French and the Chinese. 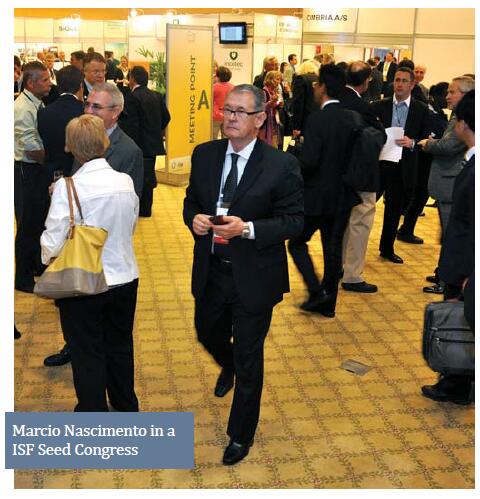 In recent years, MNagro has been conducting negotiations for the Limagrain Group, with the companies Sementes Guerra, Brasmilho and Genetica AgrÃ­cola (all in maize seeds) and DNA (wheat), and also in the KWS Group with Riber Sementes and Semilia (both in maize). He recently participated in the merger of Atlântica Sementes with Nuseed, as well as Agrosol with In Vivo, Guerra seeds with RAGT, and the installation of Nexsteppe on the country, dedicated to sorghums for bioenergy.

According to Marcio Nascimento, Brazil is the top topic of the moment to receive investments from foreign companies, which will boost the business in the country. First was the acquisition of large companies that had plant breeding and biotechnology programs, then those that only had plant breeding programs, and now the emphasis is on seed producers who have good access to farmers, which are many.

One of the additional reasons that Marcio sees in the investment of these seed companies in Brazil is that, in general, they make strategic plans of 10 years,in which they estimate a great growth (above 100%), and then realize that some markets are not able to grow at this pace, because the market is already mature and does not grow so much and/or they already have a high market share, making a big growth impossible. In this way, they are forced to consider that the growth projected by them in a decade (or more) will have to be made in other countries of the world and not where they are based. At the moment, when they look outside their country, they are sure that Brazil is an agricultural power and that the seed market, although competitive, is big enough to allow them to grow.

The interest of one company in investing in another should be considered as positive because it is the recognition that something of a high professional level has been realized. The difficulty is in determining the intangible value that the name of a company has in the market, which, however, is a contrived aspect. What a company wooed for sale cannot say is that it is not interested in receiving investment for purchase or a joint venture. In a capitalist system, profit is essential, and to get it, investments are needed. 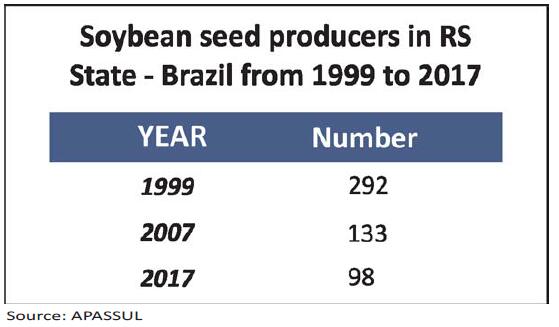 Brazil, with a seed business of more than 3.5 billion dollars a year, disregarding the value of seed treatment and technological innovations patented through GMOs, really arouses the attention of those who want to invest on a promising and reliable environment, making the seed business a place where all seek to offer the farmer high quality seeds of improved varieties. This dynamic also has as a beneficial consequence, improving companies that develop equipment (sowing, harvest and post-harvest), products (treatment and coating of seeds), and provide specialized services for seed producers (quality assessment and computerization). It is estimated that more than 8.000 agronomist engineers are working on the seed business in the country.

Competition is essential in the business world, which presupposes rigidly required standards, norms, deadlines, prices and quality, bringing in the need for investment, which is often achieved through the purchase of one company for another or through a joint ventures between companies. It is evident that the consolidation of a certain sector tends to decrease the number of participants, and those who remain, certainly, seek to offer the best to their customers. In this sense, according to data from the Rio Grande do Sul state and Seed Commission (CSM-RS), the number of soybean seed producers has decreased from over 250 to less than 120 in the last 15 years, exemplifying natural consolidation of the business, in which the most efficient ones advance, while the less efficient ones tend to leave the activity.

The seed business in Brazil exceeds 3.5 billion dollars per year, which is divided between seed producers and breeders of new cultivars. This business, together with a legal platform that provides security for companies, has led to the consolidation of the sector, with the purchase of companies or the formation of joint ventures with companies from abroad. In the last five years, the transactions have mainly occurred with French and Chinese companies, investing in companies that had plant breeding programs already consolidated, mainly in corn and soybeans and, to a lesser extent, wheat and sorghum. In corn, which had a concentration of companies in the sector, there was an increase in the number of companies that own more than 70% of the seed market due to the latest acquisitions and mergers.

The search for consolidated seed companies with good access to the farmer will always exist and apparently will be a subject of much attention in the reality of agriculture as we move into the 21st century.