Please see below some briefs news about vegetable business in Brazil last months.

2016 ONION MARKET- According CEPEA entity 2016 was a year in which onion market register extreme values. Growers in the South of Brazil who harvest about November/ December and supply domestic consumption until March & April of coming year had a very negative impact on their yield, in spite of the increase sowed area. As a result of it the supply for onions in domestic market the South crop supply finished by March 2016. This provokes a very high price increase reaching about USD1, 0 per kg at whole sales market. Prices at growers level from November 2015 thru April 2016 was about USD0,48 per kg which was 78% higher than production costs, (graphic below in local currency per kg) estimated about USD0,27/ kg. One reason of this high price was the fact Argentina crop that used to be imported into Brazil on this period was short helping to increase price. The total bulb importation done by Brazil was 171,700 tons, and Argentina participates with 46% of the total. If we compare this with first semester of 2014, Argentina reduces the exports to Brazil about 35%. The volume of 54% imported comes from Europe.

Irece region in Bahia State that according CEPEA sowed about 3200 has in 2016 with a 14% expansion in area, had good prices in April and May when start to harvest, but decrease on following months. They also report a yield of 77 tons per ha.

Cerrado region in Minas Gerais and Goias State sowed about 2750 has and report yields between 80 and 70 tons per ha.

Largest sowing region reported by CEPEA is Ituporanga in South of Brazil, with about 14500 has, and second largest region is San Francisco Valley in Northeast with about 5400 has. 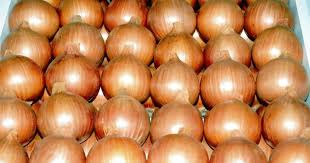 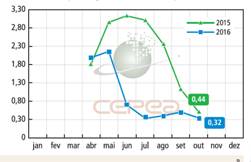 2016 WATERMELON MARKET- According CEPEA weather conditions had a positive impact on prices in 2016. They reported a planted area in Tocantins State and Goias State of 6500 and 5000 has, which are about 19% decrease compared to 2015 in Tocantins and 11% increase in Goias. They had excess of rain at harvesting time In Tocantins State and report a 32 tons per ha of yield. Selling prices by growers were about 23% higher than previous year.

In Goias State they report a very good yield of 53 tons per ha, and price around 5,5% higher than previous year.

CEPEA report as largest growing are the Sates of Sao Paulo with about 10,700 has and Rio Grande do Sul with about 8,000 has. Sao Paulo State in fact has two crops per year being the one harvest in September thru January the largest one. For the crop being harvested now they are reporting a 17% increase in planted area.

The crop in Rio Grande do Sul State which is being harvest now had a negative impact from weather conditions.

Export of watermelon registered a record volume growth in Brazil. They said the season 2015/16, that goes from Set 2015 thru April 2016 indicated about 54,000 tons were exported basically for seedless type. Production region for seed less watermelon is at same growing region of melon in Northeast of Brazil. Unfortunately prices in dollars were 43% lower than past year. Since exchange rate was favorable the local currency amounts received by growers were not so bad. Fist indications for coming season are positive.

Watermelon seed market had changed a lot for hybrids on last 5-8 years in Brazil. So it represents a high value market among vegetable species in Brazil. Hybrids are being used on seeded watermelon segment in very reasonable % and 100% in seed less segment. 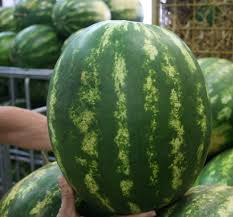 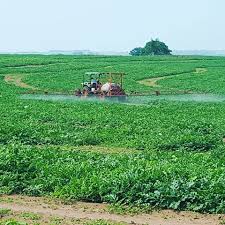 During winter, hail storm and frost impact fields in Sao Paulo green belt and in some cases reduce yield by 65%. In view of it Sao Paulo region had to bring products from other growing regions which had a positive price increase for such regions like in Rio de Janeiro and Minas Gerais States. In June 2016 the loose leaf lettuce type reached about USD0,30 per unit which is a record price level.

For the 2016-17 summer seasons (on going now) the planted area is around the same from last year. CEPEA estimate as the largest growing are the region around Sao Paulo city called the “green belt”, which grows more than 16,000 has.

Lettuce market in Brazil have on loose leaf type the largest segment followed by iceberg type and butter head as the third one. Other type like romaine is still market niches.

A very high percentage of seeds are sold in pelleted format and large amount of growers in more developed region buy seedlings from plant raisers or buy seeds and take it to plant raisers to produce seedlings paying for their labor. 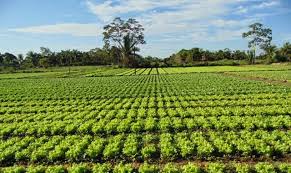 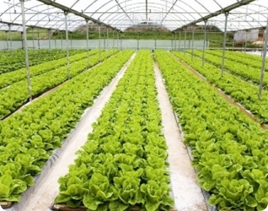