Please see below some news on field crops inn Brazil.

According CONAB (National Company of Supply) most recent estimate for 2015/16 grain crop will be 209,01 million tons produced in a planted area of 58,5 million hectares. This means 464,000 hectares more than the past crop.

Soybean remains as the largest crop using  56,7% of total area and the crop with highest increase-3,2% or 1,1 million hectares. Soybean should have the largest increase in volume produced reaching 2,8 million tons.

Corn had a “first crop” or Summer crop with 9,2% decrease (being occupied by soybean) and a growth of 3,7% on the second crop. Total corn crop is estimate to be 15,480 million hectares.

On graphic below, we can see total info on grain production in Brazil (dark red portion is the average yield growth, red line is the total volume produced (million tons) and yellow line is the total area planted (in hectares). 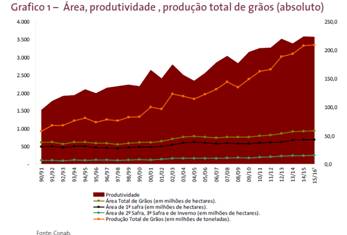 Graphic below indicates % of volume by species; sequence (top to down at right side):soybean, corn, Rice, wheat, dry beans, cotton, other crops. 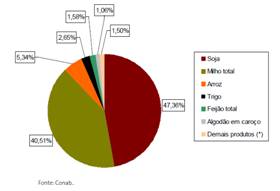 COMMENTS BY SOME CROPS

COTTON- total 2015/15 crop should be about 965,000 hectares or 1,1% less than past crop. Mato Grosso State the largest growing area  should have a growth of 6,1% compared to past crop. On other side Bahia State the second largest growing area will have a reduction of 12,4% . Yield in Bahia State estimated about 3525 kgs per hectare while in Mato Grosso 3945 kgs per hectare. Cotton seed market are dominated by few seeds companies, and a limited offer of public varieties. 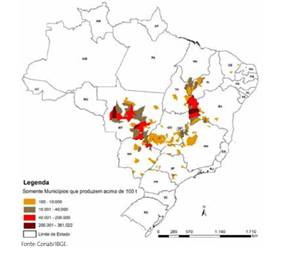 RICE- total crop should be 10,2% less than past crop. Key reason is reduction on planted area of 11,8%, and yield increase by 1,8%. Rio Grande do Sul (in the border with Uruguay)  holds the largest planted area with 1,08 million hectares. In this region we have a high % of irrigated rice and estimated yield is 7815 kgs per hectare. Maranhao State in Northeast of Brazil has a second largest area with 197,000 hectares, but yield is very low, about 1440 kg per hectare. Majority of the States in Central and Northeast region of Brazil has such low yield and grown crops on dry lands areas. Scenario for the 2015/16 crop is that Brazil will import a little more rice from  Paraguay and Argentina and will decrease slightly the exported volume, in view of good domestic prices. As far as seeds Brazil are using limited amount of hybrids seeds in irrigated areas. Other irrigated areas are using open pollinated varieties developed by public and private companies. In dry land regions there is a high % of saved seeds. 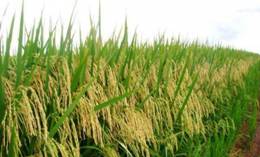 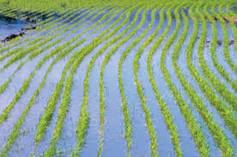 CORN- The two corn crops in Brazil should have a decrease in area of 1,4% compared to 2014/15. The first crop or Summer crop will continue to decrease, while the second crop will keep increasing. First crop will represents 36% of total area while balance are second crop. High prices for grain in the market and the fact several growers sold their crop in advance (55% in Mato Grosso State) helped to motivate growers to plant it. Mato Grosso is has the largest are in corn in Brazil, about 3,400 million hectares followed by Parana State with 2,150 ,million hectares. Majority of hybrids used in Brazil are Single Cross hybrids and there is an estimate that 13,1 million hectares is being planted with GMO. There are 29 traits approved for corn in Brazil.

See below the distribution of both crops by region(dark color=higher volume). 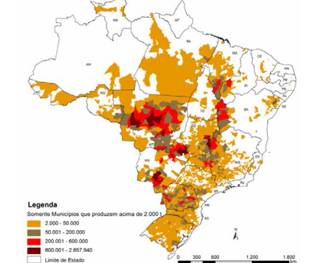 Brazil corn exportation is becoming a consistent business as can be confirmed below. Estimate are that volume exported until Feb 2017 would reach 30,7 tons(starting by Jan 2016).

Soybean seed market is getting more and more competitive in Brazil. In additions to the companies who already compete for this market we see now Dow putting more efforts on it, and also Bayer coming more aggressively to the market. BASF license some traits to Embrapa, and this will also create more competition. Other small domestic companies are also appearing to compete on this market. 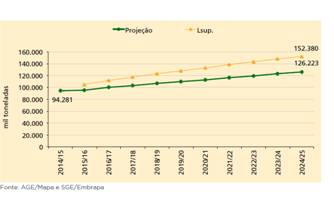 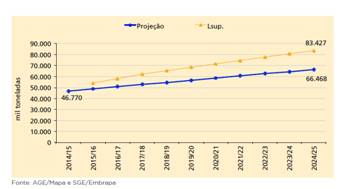