Brazil has some utilization of temperate forage seed basically in 3 States in the South Region but since it is a tropical country, the major forage growing area is for tropical grass species.

Several years ago, a cooperative project between a seed company association-UNIPASTO and EMBRAPA, the largest agricultural national research organization, was established and since that, a huge development of new cultivars is taking place. This way nowadays, we have many tropical grass cultivars developed in Brazil and well adapted to tropical conditions. Thus, the national seed industry can supply the market needs and also to export seeds to other areas of South America, Central America and North America (Mexico) as well as any other tropical countries in the world.

Statistics about pastures in Brazil are in some way not very accurate, but some figures indicate Brazil has to renew 10 million hectares of pasture per year so this represents a need of around 80,000 ton. of seeds.

Other figures indicate that Brazil produces about 40 to 45,000 ton. of grass seed from which 8 to 10,000 are exported to around 35 different countries. Some important points to be considered in this segment are that in the local market the seeds are sold with less purity than the exported seeds; the use of incrustrated seeds is growing in Brazil in the last 5 years and hybrid seeds are being introduced in a very limited scale until now, but should continue growing in the future.

The use of tropical grass seeds is increasing in Brazil since besides the traditional use, two new methods were developed in the recent years. One method combines Grain Crops cultivation with Pasture and Forest, so famers have a double utilization for their lands and the other is the usage of grass for incorporation of organic material to cereal crops. Seed companies  indicate this market value is around USD 500 million and that Brachiaria types represent  (Source-Seed News magazine) 80% of it which is complemented by Panicum maximum. Among the Brachiaria types, the Brachiaria brizantha, Cv Maranduis by far the most popular one, representing around 50% of it.

Both types of seeds are harvested in Brazil, after seed mature and fall to the soil, and it generates a much better seed in terms of germination but, for sure, it makes the seed producer brings a lot of impurity to his processing plant. See below some details of harvesting operation.

The information coming from the industry is that the area for tropical forage seed production in Brazil is about 120,000 ha. per year.

Pasture seeds are also coming in the direction of seed technology adoption by using incrustation and pelleting methods. There is also an introduction of hybrids on the pasture cultivars.

Below you can verify the concentration of cattle in Brazil 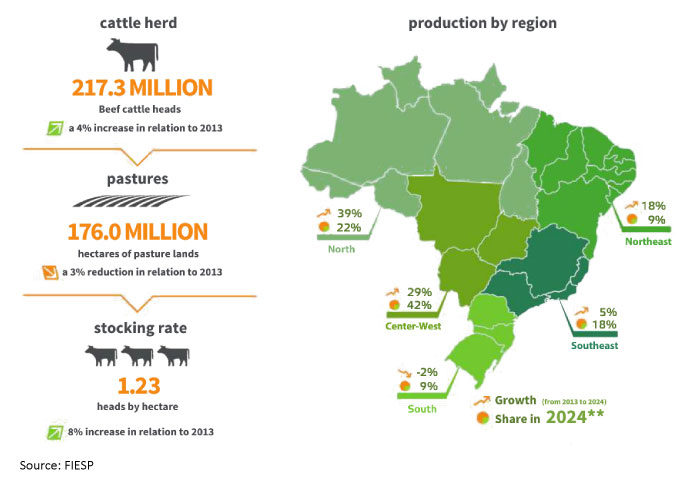